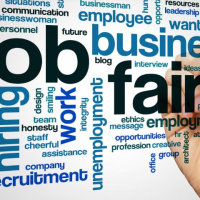 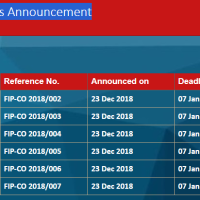 SPO (Strengthening Participatory Organization), a leading Pakistani NGO, marked its 25th anniversary celebrations at the National Library Auditorium, Islamabad on 21st February 2019. President Dr. Arif Alvi, as the chief guest of this silver jubilee event, appreciated the contribution by SPO in reaching out to poor and disadvantaged people living in remote areas of 75 districts in all 4 provinces over the past quarter century . He urged SPO to also explore the scope for its activism in critical sectors such as balanced population growth, climate change and improved healthcare.

Chairperson SPO, Senator (r) Javed Jabbar presented an overview of SPO’s vision and its evolution. These were gleaned from 25 years of SPO’s work serving the people while working with them on diverse social development themes in all the four provinces of Pakistan. Co-Vice Chairperson SPO Ms. Arifa Mazhar also shared her views with participants, with particular reference to the empowerment of women residing in rural areas.

President Dr. Arif Alvi gave away a ‘Lifetime Achievement Award’ to Member SPO Board of Directors Syed Abid Rizvi in recognition of his dedicated work and longstanding commitment to SPO ideals. Chief Executive SPO Mr. Saleem Malik thanked the guests for gracing the occasion. Earlier, three village women community representatives and one male Christian from the four provinces shared their respective inspiring stories on their work in partnership with SPO under different initiatives over the years.

Plan Pakistan recently shut down its operations in Pakistan. We are sharing the ending note which was published on their official website.

“After more than 2 decades of working in Pakistan, Plan International has stopped operating in the country following orders from the Government of Pakistan.

Plan International is deeply saddened to announce that it has shut down operations in Pakistan after more than 2 decades of development work in the country, following the Government of Pakistan’s orders.

Through a letter issued on 2 October 2018, the Ministry of Interior instructed Plan International to wind up operations in the country within 60 days. The letter was in response to an appeal filed by the organisation in December 2017 after its registration application was turned down by the government. No reason was provided for the rejection.

We understand that several other international NGOs in Pakistan have also been asked to shut down their operations in the country.

We are extremely concerned about the impact this will have on communities, particularly hundreds of thousands of children, that Plan International supported through its development work. We are also very sad about the impact the decision has had on our own staff – who are all Pakistani nationals.

Plan International started operations in Pakistan in 1997 and was supporting over 1.6 million children across the country through its various programmes. At the time of closure, the organisation had over 25,000 sponsored children in the country and an operating budget of more than €8.3 million with 202 full-time staff.

During more than 2 decades of operations in Pakistan, Plan International invested €160 million in its work which directly benefitted 26 million people in over 29,000 communities.

Our key achievements in Pakistan have been:

The government directive says that Plan International can reapply for registration with a new Memorandum of Understanding (MoU) after 6 months. The details on the process and the time it will take are currently unavailable.

Plan international will continue to take a keen interest in Pakistan – particularly on development issues that affect marginalised populations. We remain optimistic about our return to the country one day, so we can restart our work with vulnerable children, especially girls. ” 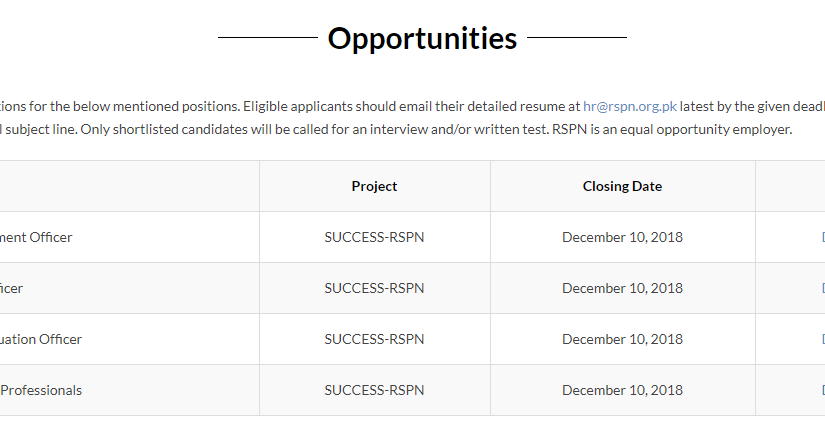 RSPN is seeking applications for the below mentioned positions. Eligible applicants should email their detailed resume at hr@rspn.org.pk latest by the given deadline by mentioning the position title in the email subject line. Only shortlisted candidates will be called for an interview and/or written test. RSPN is an equal opportunity employer.

Universal Children Day is observed to encourage understanding among children and to institute actions for their welfare.It takes place on November 20, the day on which Declaration of the Rights of the Child was ratified.

Pakistan is among the first 20 countries to ratify the Convention on the rights of the child. Government and non-governmental organizations, civil society, electronic, print and social media relayed the message — for the children to understand each others, for activists to take action for the welfare of the children. 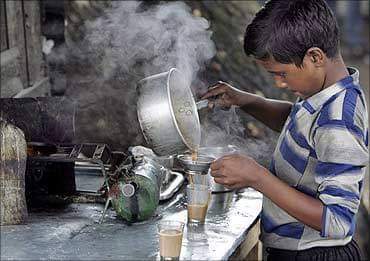 We met Arshad 15, who was roaming around a fancy hotel down the street. Inside, a conference was in-progress where ladies and gentlemen were pressing on Children Rights in the society. Arshad, perhaps, was yielding the impact at first-hand. He was outside with his cobbler’s toolbox, ready to fix the gentlemen’s shoe problems—dusting, polishing and repairing.

“Do you know about the Universal Children’s Day that we are celebrating today?” I asked.

He nodded his head in negation but seeing the opportunity of human interaction, he pitched in his sale verbiage: “May I shine your shoes, brother?” The kid is all focused on his job, in a market where vulnerabilities outnumber opportunities. With the physical and mental capabilities, he is too young to face the bitter reality.

Oblivious to the conditions Arshad lives in, we asked whether he has plans to go to school. “The question is a fallacy. I am poor and that should presumably be your answer” He replied.

Arshad lives in a country where 6 million children have been affected by floods. 12 million children are underage workers. More than 423,000 children die before their 5th birthday. Children here are prone to dangers such as arm conflicts, underage marriages, child molestation, child abduction, murders, injuries, sodomy, suicides bombings and human trafficking.

We walked few blocks away to see the grandeur of the Universal Children’s Day. At Munshees, we saw a security guard, in culturally tailored red and khaki uniform, beating up a child, hardly of 12, with his truncheon. The kid was allegedly involved in sucking up empty beverage bottles, picking up empty cans, and cardboards from outside of the premises. It was an unlucky day for the kid that got caught and was beaten to tears.

Other than the in-door conferences and media news, is there any mechanism to enforce the principle, “The child shall be protected against all forms of neglect, cruelty and exploitation. He shall not be the subject of traffic, in any form”?

We also met Qayyum 15, washing dishes at a café in Karachi Company. He left his school after grade 5th. He is working here for the last two years but intends to go back to school to become a doctor. Only God knows the circumstances under which his ambition will survive.

We witnessed several scavengers’ kids observing their day on piles of garbage, picking recyclable items so that they can make some money to buy food. This is perhaps their only employment opportunity, given their age and strengths.

Governments make high claims of eradicating poverty and social injustices. The need of the time is to take some practical steps towards the UN Sustainable Development Goals, especially those related to children.

Originally published on the Dardistan Times

On October 02, Tuesday, the government of Pakistan issued notices to 18 international non-government organizations (INGOs) to wind up their activities in the country within 60 days. These INGos include: 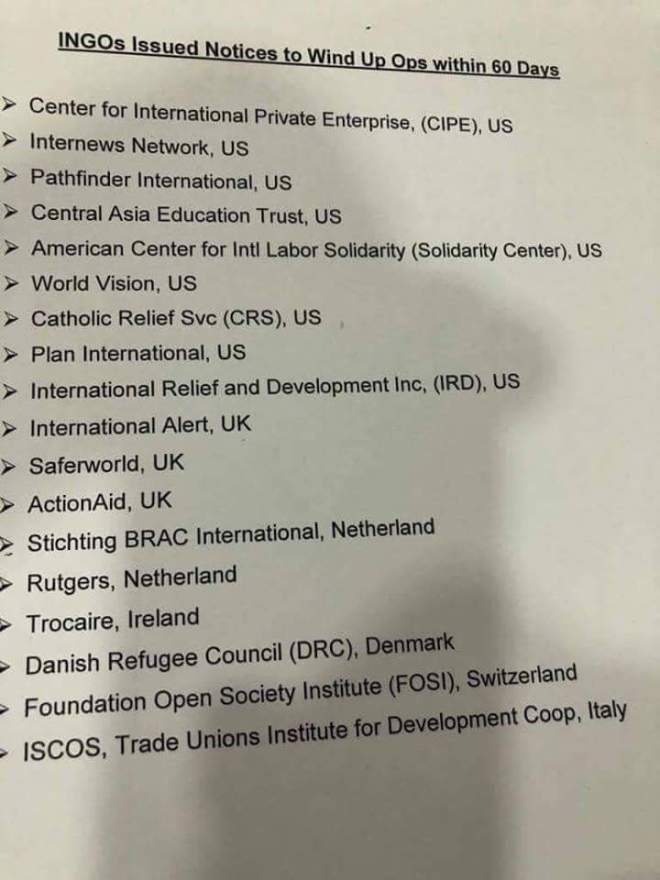 A letter sent to the country director of Action Aid UK stated that a special committee disapproved a representation filed by the Action Aid and therefore it has been asked to wind up the activities within 60 days. This organization may re-apply for registration after six months.

Action Aid UK, Plan International US, Rutgers Netherlands, International UK, Trocair, Ireland and World Vision US are among the organization which has a countrywide presence in the country and hundreds of employees are working with these organizations.